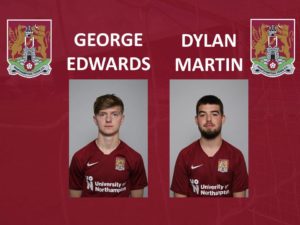 Dylan Martin, who has recently completed his time as an FEP Scholar, was recently announced as VLUK FE Student of the Year. VLUK are our funding provider for the Football and Education Programme and have lots of partner clubs, both in football and other sports, all over the country. This is fantastic recognition for Dylan, who already shared the NTFC FEP Student of the Year with George Edwards as we announced at the end of June.

‘He has an excellent work ethic, always polite and highly respectful at all times’ said a VLUK statement. ‘He has volunteered for activities as well working with the elderly community at the local independent living home. He was commended and praised for his caring nature and humour’. On top of this, Dylan has been volunteering at NTFC 1st team games helping pre-match in the family zone and at half time with the Boost Penalty Shoot Out, which he has been doing since prior to his time as an FEP Scholar. For the full article on the VLUK website, visit www.vluk.org/fe-student-of-the-year-2020/

‘It is great to see Dylan recognised for not only his hard work in his education but also for his effort in giving up his time to volunteer’ said FEP Lead, Fran Constancio. ‘He has always been a very popular member of the group and has really developed during his time with us. We hope that he continues to have lots of success in the future’.

Dylan is now planning on studying at Cardiff University as he continues to pursue a job in the sports industry. All the best Dylan, you have been an absolute credit to the Programme and the Football Club!