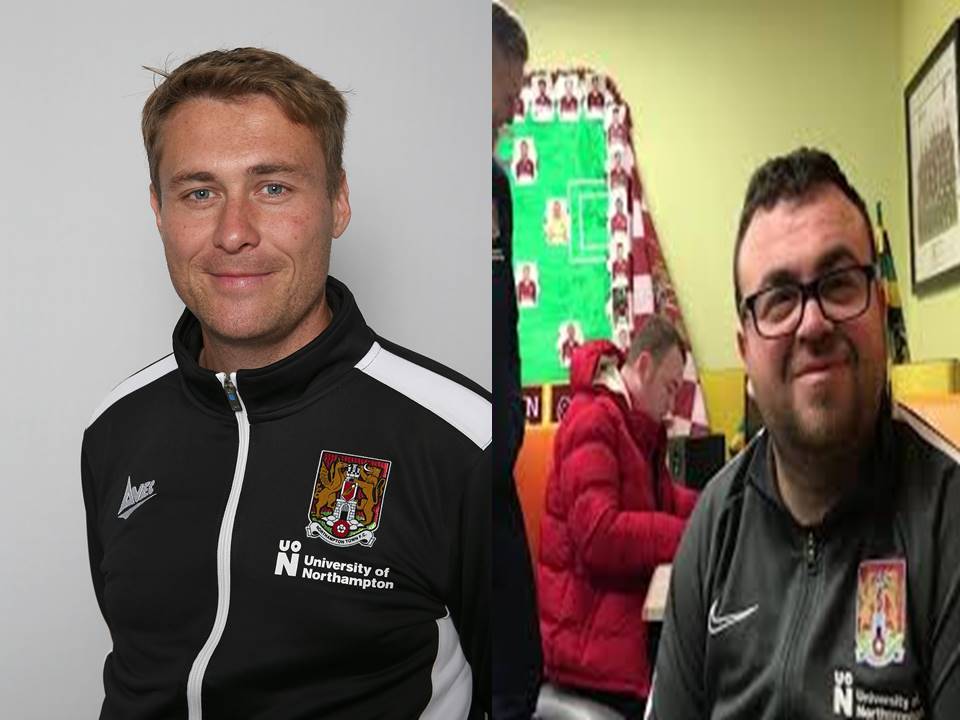 Pete and Adam Complete Their Challenge!! 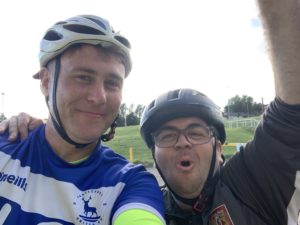 Pete and Adam at the end of the 197 miles cycled!

On Monday, our Academy Education Lead, Pete Stephenson, and NTFC’s popular Kit Manager, Adam Moreton, completed their 197 mile bike ride challenge. The boys had originally set a day 10 time frame to complete 195 miles but a slight Google Maps error saw 2 miles added on during the challenge. That didn’t phase them though and they completed the distance, the equivalent of travelling from the PTS Academy Stadium to Victoria Park in Hartlepool, in 8 days!

The challenge was taken on to raise money for 3 causes. 50% of the money raised is going to the Northamptonshire Health Charity, specially the Crisis Team based in Northampton. The rest of the money is being split between the Hartlepool United Budget Booster and the Northampton Town FC Academy and Education Departments. The current total raised stands at £1,710 as of 2.30pm on Tuesday, but the donations page will remain open for the next couple of weeks to give people further opportunity to donate what they can to show their support for the boys’ efforts. The page to visit is www.justgiving.com/crowdfunding/pete-and-morts-big-cycle

‘It was tough at times as some of the routes we took ended up with us finding some rather sizeable hills that we had to climb around the Northamptonshire countryside’ said Pete. ‘I thought at times that it was going to be too much for Adam but the big man just kept on going, despite various issues he was having with his bike! On the Saturday, he suffered 2 punctures to his back tyre and we were indebted to the help of Kim Birtwhistle, who helped us out on both occasions so that we could continue the challenge’. 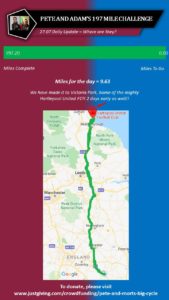 The metaphorical journey that was completed!

Pete continued, ‘We also need to say a huge thank you to Jean Limpitlaw for the use of one of her bikes that I used for the challenge and then providing a 2nd bike for the last 2 days so Adam could complete the challenge with me. We are both extremely grateful to both of them for their help. We are also absolutely humbled by all the people that have donated so far and we are aware that others are planning to donate in the next couple of weeks. The Just Giving donation page will stay open for a couple of weeks so any more donations that increase the total would be amazing so that we can increase the amount we raise’.

Thoughts have already turned to the next challenge. ‘Overall, it was a really great few days riding round with Adam. We were noticed several times and had some really nice comments from people’, Pete commented. ‘It has whetted the appetite for doing another challenge. I would like to do the ride to Amsterdam when it returns hopefully next year and I would also like to do the actual journey from the PTS to The Vic. I did suggest to Adam about continuing with me to do the return journey from The Vic to the PTS but I don’t think he was too keen!’

Pete documented the challenge on his Twitter by posting at the start and end of the rides and did daily video reviews including Adam’s new catchphrase ‘Hi Adam!’ If you want to catch up on these, these can be found at @petestephenson2 and there will be further shout outs on social media over the next few weeks as they hope to attract some more donations before announcing the overall figure raised.

Well done boys, a fantastic effort and we are so proud and grateful for your efforts!!