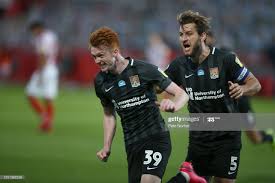 The Education Department, like all other areas of the club, were absolutely thrilled and delighted with the fantastic performance and result on Monday night away at Cheltenham Town. The spirit, determination and skill involved typified the philosophy of the club and is something we try to encourage and develop with all of our young people. Well done to Keith and the players in achieving this and we will all be rooting for the boys when they face Exeter City at Wembley on Monday 29th June!

To celebrate the fantastic victory, one of our new cohort of FEP Scholars, Ethan Mahoney, has written match reports from both legs of the playoff tie against Cheltenham. Ethan will officially join us in September but will follow a different pathway to most of those on the FEP. Whilst completing his Extended Diploma in Sport (Coaching and Development), he will follow an extended work placement where he will take on media roles around the FEP and shadow both Matt Derrig and Jamie Duncan in the club’s media department. Ethan hopes to use the experience to go on and pursue a career in the media working around football and we hope that the experience he can get with the FEP in the next 2 years will help him on his journey towards this! Ethan’s reports are below, great work already Ethan!! 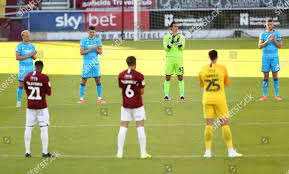 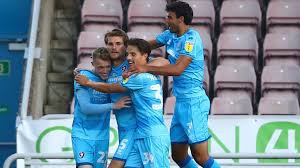 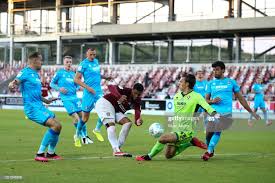 104 days after League Two came to a halt, Northampton Town returned to one of their biggest matches in recent memory; a League Two playoff semi final first leg against Cheltenham Town. Sixfields is normally packed with fans roaring the Cobblers on but of course due to the recent pandemic the stadium was near empty, although many loyal Cobblers fans were there in cardboard form supporting the team.

Northampton started brightly and were unsettling a strong Cheltenham defence when Michael Harriman was tripped in the box and referee Marc Edwards gave a penalty to the Cobblers early on. Sam Hoskins is the normal penalty taker for Northampton having scored five out of five but due to suspension he was out and Ryan Watson’s subsequent attempt was well saved by goalkeeper Owen Evan’s.

That penalty save perhaps gave Cheltenham some confidence and Charlie Raglan headed home a corner to put them one up. Cheltenham’s delivery from set pieces looked good all night and Raglans header took a slight deflection to give Arnold no chance in goal.

However the response from Northampton was really good and Owen Evan’s was in fine form to deny them. He made a great save from a powerful effort from Arsenal loanee James Olyainka who’s time with the Gunners was clearly showing as he looked dangerous in the first half for a determined Cobblers side.

Another dangerous player was striker Callum Morton who early in the second half played an excellent pass to forward Vadaine Olivier who’s goal bound effort was smothered by Owen Evan’s.

His opposite number Steve Arnold did well at the other end to deny a fierce drive from experienced Cheltenham forward Reuben Reid. Cheltenham started to raise the tempo near the end of the match and with five minutes left on the clock Conor Thomas scored a second goal for Cheltenham when the ball rebounded to him after Scott Wharton blocked a goal bound effort.

Northampton go into the match on Monday 2-0 down but the tie is far from over and if they score the first goal at Cheltenham, they will be right back into it. It is of course only half time in the tie. 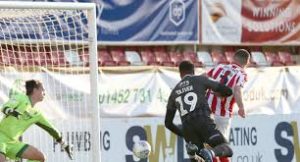 There is a reason that you are told not to predict football and the Cobblers proved it last night. Cheltenham went into the second leg of this League Two semi final playoff with a two nil lead after a great season and a good display at the PTS Academy Stadium. A lot of people had written Northampton off but Keith Curle was not one of those, stressing that the tie wasn’t over.

However it was imperative that the Cobblers started well and scored the first goal at an empty Jonny Rocks Stadium and they certainly did that with Nicky Adam’s producing a brilliant cross to pick out Cobblers front man Vadaine Olivier and his header was strong and precise enough to beat Owen Evan’s in the Cheltenham goal. That goal was Olivier’s eighth of a good season and it gave Northampton a great start and also confidence that this turnaround could actually happen.

Cobblers Captain Charlie Goode definitely had that confidence and his lobbed ball into the box picked out Olivier but this time he could not hit the target. However Northampton clearly believed that they could get back into this game and that belief was epitomised by Goode who showed the signs of a great captain by going out there and giving his all on the pitch.

Northampton continued to unsettle a normally resolute Cheltenham defence and forced a corner in the second half. Charlie Goode powered a header towards goal which ended up being scrambled in by West Brom loanee Callum Morton. This goal made it two nil on the night and levelled the scores of the tie meaning The Cobblers were facing the prospect of extra time and penalties.

The second goal really seemed to deflate Cheltenham and The Cobblers clearly sensed a chance to go for the win in the ninety minutes. Late on Vadaine Oliver flicked a hopeful ball towards Michael Harriman which was miscued by Cheltenham’s defence and Harriman showed excellent determination by prodding a shot towards goal. Owen Evan’s got a hand to the ball and it crashed against the post  before falling kindly for Callum Morton who once again had showed great predatory instincts and was waiting to stab it home.

This sent the players and staff into wild celebrations and it is one of those moments where you know if there was over one thousand loyal travelling fans, they would be going crazy. As for Callum Morton it is his seventh goal in ten appearances which shows that he is a fabulous young player and Keith Curle made a great decision by getting him on loan from West Bromwich Albion.

When the final whistle blew there was disbelief all around the pitch. Not only had The Cobblers made it to Wembley but the manner of the victory was incredible. Every player and member of staff played there part and this win will live long in the memory of everyone who follows the Cobblers. However Keith Curle will be the first to say that the hard work is not over as the team prepare for a League Two playoff final at Wembley Stadium. 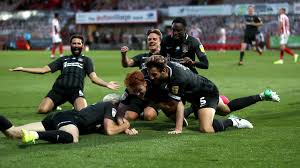